Steelhead - A cold day in April

The excitement was great as I began to pack for my long awaited Steelhead trip. I was going with a group of women from our local group called Flygirls - to me; these were the most exciting trips. The trip would include hours of laughter from this group of women anglers and to top it off we would have a great day spent floating on the Muskegon River chasing the allusive Steelhead.

I had been counting down the days to my trip, but as the time neared my concerns were rising. Weather forecasters were predicting a four-day snowstorm. It was going to hit the Great Lakes in waves - ice, sleet, snow, and rain. As I finished my packing, I found myself watching the forecast. I prayed the fishing prayer, “Lord let the fish bite.”

I arrived at the cabin on Friday night, joining the many women who had arrived earlier. The weather was already showing some of the changes predicted. Inside the cabin, the mood of the group remained lighthearted in spite of the dismal forecast. Stories were shared around a crackling fire, and frequent laughter filled the air. As the flames began to diminish and the shadows grew longer, the crowd around the fire began to disappear. Women made their way off to their rooms to ready themselves for tomorrow’s adventure. They were turning in for the night - dreaming of the adventures that would unfold the next day.


Morning came quickly.  As soon as I opened my eyes, I felt the cold and realized the glaring brightness was newly fallen snow. The guides called, warning us that many of the booked trips had canceled for the day. I knew this group would not cancel - we were excited about this trip and a bunch of diehard fishing women.

Breakfast hurried along as woman ran to get ready — packing on many layers of clothing, winter coats, waders, and rain gear. We prepared for any weather that came through. Soon everyone was ready. The guides began to arrive, each arranged to pick up the ladies that would be floating with them that day. For myself and April it was an awesome guy named Luke.

We got out on the river, and within what seemed to be only a few minutes, the wind and hail started. Jackets were pulled tight as we battled the cold that was bearing down on us. In efforts to stay warm, hot chocolate was sipped with whatever else; mine had the taste of Rum warming my throat as I sipped. The wind was so strong that it became dangerous to fly fish. We soon began to do what is referred to as Chuck and Duck. True to its name we were doing precisely that - ducking and hoping the wind would not push the fly back into our faces.

The wind was changing, as was the weather - sleet one minute, then giant wet snowflakes the next. The fish seemed as cold as us - we already were several hours into the float and had not even felt the tug of a fish. I changed my gloves for the third time - each time sliding a dry hand warmer deep into my glove. Suddenly, as the wind had changed, so did the bite. I nearly lost my fly rod it came so hard. The battle had begun! We spent the next two hours making an event that would stand out in our memories. Even the guide service talks about the trip as the worse weather endured with the best fishing. For me, the steelhead landed after a phenomenal fight was well worth the cold. It would indeed be a trip I would remember for a very long time.

Email ThisBlogThis!Share to TwitterShare to FacebookShare to Pinterest
Labels: Steelhead

Waist deep in water that was pulling and tiring my legs, I began to wonder if fishing today was a good idea. The water was high, and the bit... 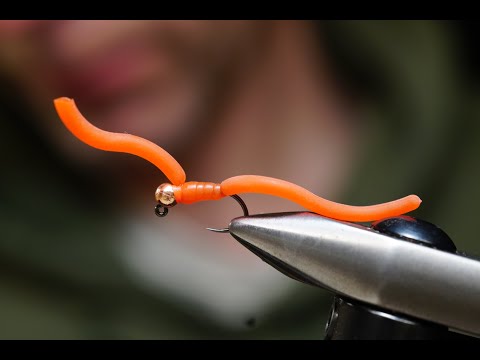 Stefano
Susan is a Registered Nurse that lives in the beautiful state of Michigan. She spends her time working as a pediatric nurse, and in her spare time, she can be found fly fishing and enjoying various Michigan Rivers.